As we've come to expect, Michael Reed has broken another story for the Examiner News on METRO's absolute financial disarray courtesy of the White/Wolff/Wilson years.

Here are some key excerpts:

When Metro board members take a look at the transit agency's annual audit, headed to the finance committee next month, the total assets portion of the ledger will be about $168 million less than it is today.

That is the staggering amount President George Greanias told the Finance Committee on Wednesday that Metro needs to write off its books as recorded capital assets "you couldn't connect to anything we have of value."

Perhaps coming as something of a surprise, though, was the cost related to design work for the abandoned intermodal terminal project, Burnett Plaza, once planned for north of the UH-Downtown business school  a whopping $41 million to be written off. 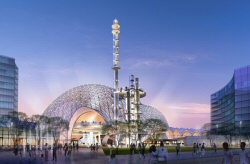 Describing the plans for the terminal as "grandiose" and "unachievable," Greanias said land purchased for the project remained as an asset, valued separately at $21 million.

"I'm not quite sure how it got to this point," he said of the Burnett plans. "They are lovely drawings."

At least as odd, $26 million in labor costs had been listed as a capital asset, rather than an operating expense. Not discussed at the meeting: whether Metro would have restate any of its audited financial statements from 2004-09 as a result (Michael Reed, Metro writing off $168 million in worthless assets, Examiner News).

We normally do not excerpt so heavily (and there are still more details in Reed's story, which should be read in its entirety), but we wanted to capture the severity of the financial irregularities at the White/Wolff/Wilson-era METRO. We would like to remind readers that taxpayers still provided Frank Wilson a wonderful severance package and picked up his legal bills. We would also note that Houtopians have reacted poorly in the past to our having a good laugh at their pie-in-the-sky drawings and METRO-dreaming. We can't help but wonder if Mr. Greanias provokes a similar reaction. Do be sure and click over to the architect site to have a look at some of the pretty drawings your tax dollars purchased (one of which we posted above), since that's all you're going to be getting out of this effort.

While we're strolling down memory lane, here's a look back at the Chron coverage of METRO's proposed intermodal terminal in 2006:

"The issue is if we are going to do this, we want to enhance the community and make a real landmark," Metro board chairman David Wolff said.

Metro officials envision the station becoming the hub for many of Metro's services, serving as the starting and ending point for bus routes, rail lines, bus rapid-transit lines and commuter rail. Riders could transfer and catch a bus or train to their ultimate destination.

The center could become Houston's version of "Grand Central Station," said board member Gerald Smith. "This will be a real focal point for the city."

Not a critical voice was to be found in this story, although some of us in the blogosphere had a good time with it. Others -- some of whom are now on the METRO board -- gave it the usual Houtopian treatment over time (replete with lovely drawings!).

For good measure, here's a related snippet from METRO's expensive blogger in 2007:

METRO's decision yesterday to build light rail on all five lines, instead of Bus Rapid Transit with a later conversion to light rail, represents a hugely ambitious goal.

We've said we would deliver all that by the end of 2012 - along with an Intermodal Terminal.

So how do we plan to do that?

More PR BS. On the taxpayer's dime, of course.

The rail system as described in the 2003 referendum will not be completed by the end of 2012 (or likely ever). There won't be a "Grand Central Station" or an intermodal terminal. There won't be a 50% increase in bus service (remember, that is one of the promises to voters in the 2003 referendum that has also effectively been "written off"). Instead, millions upon millions of taxpayer dollars will have literally been thrown away (to developers, to consultants, to friends of Frank Wilson, to Frank Wilson's attorneys, to a bloated PR department, etc), area transit system utilization will have declined significantly (relative to massive population gains), and some folks apparently are going to be SHOCKED when an austerity-minded Congress actually cuts funding for boondoggles of this nature.

Blogger luncheon PR gambits during the workday are all well and good, but this blogger remains much more interested in METRO's actions. The agency deserves some credit for trying to be more transparent than it was during the White/Wolff/Wilson era (and for trying to unwind some of that era's goofier financial decisions). But its actions in coming to grips with its own dire financial situation, a flawed plan loosely based on the 2003 referendum that is becoming increasingly unworkable (not to mention bad decisions to lay rail down busy streets), and a changing City of Houston and METRO service area are of much greater interest. We don't envy Messrs. Greanias and Garcia, who surely received their posts from Mayor Annise Parker with some understanding they were to "save" Houston's rail plan -- as bright and capable as they are, they are likely going to have to inform the mayor at some point that it's just really not workable any longer, given all the missteps and squandered resources.

Then it will be time to begin working on a transit plan that makes more sense for METRO's service area and METRO's actual resources.

UPDATE (02/22/2011): Reed and the Examiner News posted this important story on Saturday. The Chronicle has posted its version of the story today (Tuesday). Better to follow others than never to report it, we suppose (or worse, the Mike Snyder/Lisa Falkenberg approach to critical METRO reporting).

blogHOUSTON.net is powered by Nucleus.

Site design and Nucleus customization are by Kevin Whited.