What do they really think of Afghanistan's president?

The Chronicle makes a rather interesting statement in a staff editorial today:

Only a few months ago, many Afghans did not understand the point of elections. Before Saturday's election, more than 10 million Afghans braved terrorist attacks and assassinations to register to vote.

Exit polling and international observers predicted that Interim President Hamid Crazy would win election with more than 51 percent of the vote.

That should be President Hamid Karzai.

A few weeks ago, the Chronicle's editors blamed a website staffer for an error that turned a photo of a young girl at a political rally into an ugly political statement by the newspaper that drew (unwanted) national attention from the Wall Street Journal's James Taranto.

Today's apparent editorial slight of Afghanistan's president made it into print editions of the newspaper as well, so it's going to be harder to blame a lowly website staffer this time.

There are some real problems down at 801 Texas Avenue.

(Update) The Chronicle has corrected the online copy, with no indication that the mistake was ever there (although a new timestamp of 10:12 am on the article is revealing) and no note in the corrections, at least not yet. It will be more difficult to airbrush the paper copy that's already out. If someone would be kind enough to email a pdf of the dead tree version, that might be worth storing with our other Chron greatest hits.

(Update 2) Anne Linehan scanned the dead-tree version of the editorial. Click the [Read More] link to view it. 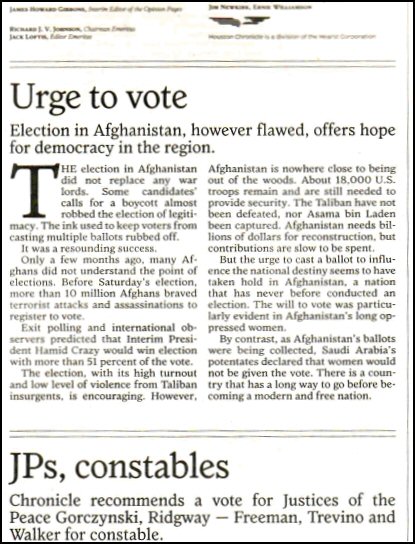 (Update 3) Welcome, OpinionJournal readers! As of 3:50 pm, the Chronicle still hasn't corrected the "Asama bin Laden" reference that James Taranto mentions in their online copy. One suspects they will at some point, but the dead-tree version above doesn't lie.

blogHOUSTON.net is powered by Nucleus.

Site design and Nucleus customization are by Kevin Whited.